One of the things everyone admired about Carrie Fisher was the way she turned mental illness into a career. In so doing, she helped so many “come out” about their own secrets. In her books, her speaking appearances, and her one-woman show, she revealed what it was like being bipolar. “Having waited my entire life to get an award for something, anything,” Debbie Reynolds’ only daughter quipped, “I now get awards all the time for being mentally ill. It’s better than being bad at being insane, right? How tragic would it be to be runner-up for Bipolar Woman of the Year?”

Carrie knew what all us standup comics know: that a problem can be turned into a powerful punchline. As a standup comic for 17 years and teaching comedy for 20 years, I found that when I joked about a problem, it made whatever I was dealing with more manageable. Laughing at a problem is empowering. I’m not just the victim. I’m the narrator, acknowledging it, taking charge of it and making fun of it. 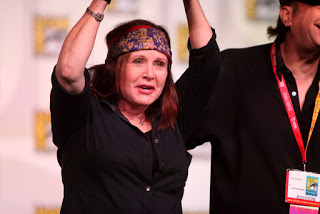  
I felt this full force at 21. Filled with rage and sadness after a difficult breakup, I took to the stage at the Hollywood Improv and proclaimed, “I just broke up with someone. We had one thing in common. We were both madly in love with HIM.” In the moment of laughter, something lifted.

When teaching comedy, the “normal” people in the workshop weren’t very funny. I remember one girl who refused to admit that anything was wrong. “No, I’ve never been rejected. I have a wonderful husband. My kids hug me every day.” There was nothing funny about that. Nobody related to her. To be funny, we had to find the courage to cop to the weirdness of our mother’s housekeeping, the fears of coming out as a gay man to a redneck father, showing that what is inside didn’t control us, but rather was the butt of a joke that led to laughter and healing.

“I wanted to tell my father I was gay, but he was always cleaning his gun,” a comedy student said on stage, winning over the audience.

My father would beat me with the belt my parents gave me for Christmas. When I was asked, “What do you want for Christmas?” I would say, “Socks!” another comedy student said to thunderous guffaws.

“Life is a cruel, horrible joke and I am the punch line,” was said by Carrie Fisher

It’s not easy being that open. In fact, it’s scary. It may be easier to tell these kinds of jokes in the privacy of a class, but going public takes guts. That’s what distinguished Carrie Fisher from many others. In her one woman show, “Wishful Drinking,” she took the risk of directing her humor at her parents, saying, “I’m a product of Hollywood inbreeding. When two celebrities mate, something like me is the result.” Instead of distancing herself from the audience by identifying her background as privileged, she freely showed the difficulties and pain, finding the way to mine it for laughter.

Here is a clip from her show on “Hollywood inbreeding 101.”

She didn’t shy away from showing the complicated relationship between mother and daughter. Interestingly, this true confessional didn’t create estrangement. We know that the two women reconciled and became close. Carrie’s honesty may have allowed her mother to understand what went wrong and try to remedy it. As Debbie Reynolds said, “Carrie and I have disagreements and stalemates, but we still walk away loving each other.”

On showcase night, my comedy students were reluctant to invite the person who would be the butt of their jokes. One woman was particularly fearful as her entire act revolved around making fun of her mom. She joked about her controlling nature, her obsessive cleaning, painted on eyebrows, and her holding up supermarket lines with excess coupon cutting. She was terrified of seeing her mother after the show. Her mother rushed over to her, hugged her and said, “You forgot to say I’m a hoarder. Here are some jokes I wrote for you to do next time!”

Carrie Fisher and Debbie Reynolds can serve as role models, teaching us that laughter can bring us closer together. It’s a better tool for healing than denying. Our secrets are often what’s funniest about us.